Ken Buck — Weld County prosecutor and former GOP candidate for US Senate — explains his stand on the UN Small Arms Treaty. This treaty may end up written in a way that might be used to strip Americans of our inalienable rights to arms guaranteed under the Second Amendment to the Constitution for the United States.

He is working with the National Association for Gun Rights (NAGR), led by Colorado’s own Dudley Brown, in staving off this usurpation.

As we discussed before, by RNC bylaws, Colorado sends a number of Delegates (and Alternate Delegates) to the National Convention where the party will choose a Presidential candidate, set elements of the party platform, and conduct other business. The Delegates are voting members of this body, while the Alternates are moved up to Delegate status, should some Delegate not be able to attend.

On April 13 and 14, there were a number of assemblies held. In addition to other business, these assemblies are held to determine who the delegates to the National Convention will be. These assemblies are in turn composed of delegates who were voted upon at county and/or state house district meetings.

Colorado will be represented at the National Convention by delegates in the following numbers:

In addition to the delegates, there were an equal number of alternates elected at the CD (21) and State at large (12) level.

The delegates elected are as follows:

Trevor is the founder and editor of KeyWiki.org a rapidly growing website with
the goal of unlocking the covert side of U.S. And Global politics.

Trevor is also the author of BARACK OBAMA AND THE ENEMIES
WITHIN. He will be selling and signing books at these events.

Cost varies per event starting at $10 see the “Registration Page”
for each for details.

Presented by the Longmont 9.12 Tea Party and Longmont Republican
Women

This is an incredible opportunity for the liberty movement
in Colorado!

“While President Obama and the Republicans in Congress spend time debating whether religious groups must provide their employees free contraceptives, a far more fundamental issue is being ignored: if we want better health insurance for all, why are we making it illegal?

“ObamaCare, known in Massachusetts as RomneyCare, effectively outlaws true health insurance. Insurance, if you think about it, should exist to protect you against catastrophic expenditures. For example, car insurance doesn’t cover the cost of gas and oil, as it would be outrageously expensive due to the incentive for increased driving. Similarly, health insurance should not cover ordinary and predictable costs, yet remains outrageously expensive because it does.”

“Then why do consumers continue to buy overpriced insurance that covers predictable costs? Government. First, the senseless connection of health insurance to employment is the result of a system that taxes cash wages but not health benefits, punishing employees who would rather have higher cash wages while making their own personal choice of health coverage.  Second, special interests in every state have lobbied legislators to mandate coverage for their particular product or service. Finally, regulation not only drives up the cost of healthcare, but also restricts entry into the field, leading to even higher prices.”

“The result is this: if you want inexpensive health insurance, but don’t want coverage for alcoholism, weight loss programs and baldness treatments, and would prefer a deductible based on your personal finances: TOUGH. Even if you’re not stuck with your employer’s choices, the type of individually tailored coverage you want is illegal.

“Instead of ObamaRomneyCare, we need to decriminalize good health insurance. Eliminate the coverage mandates, the laws against purchasing health insurance across state lines, and the unfavorable tax treatment of personal insurance policies. Remove the regulations that block entry of new insurers, including charitable organizations which could provide catastrophic protection for the poor and the club-based insurance policies that were once popular before the insurance industry and American Medical Association both pushed to make them illegal.”

“As for contraception? Women shouldn’t need a permission slip from their doctor to have safe sex. Removing the prescription requirement would massively reduce the cost of contraceptives, making it far more affordable. In turn, this would ease the burden on groups such as Planned Parenthood that have long provided free contraceptives to those in need.”

There are 3,141 counties in the United States of America, and ten of wealthiest fifteen counties are in the Washington, D.C. suburbs, including in Virginia and Maryland.  Is there any doubt why Washington, D.C. seems so chronically out of touch with the average person?

The affluence of the Washington, D.C. suburbs should not come as any surprise to anyone who has been paying attention to reports about the vast income disparity between the average federal government civilian worker and the average private sector worker.

In 2010, the Cato Institute reports that the average federal civilian worker receives $83,679 in average wages, while the average private industry worker only makes $51,986.  Further, the same report shows that when benefits are considered, the federal worker gets $126,141 in wages and benefits compared to $62,757 for the private worker.

An estimated 15 percent of the civilian federal workforce, or 300,000, live in Washington, D.C. and its surrounding suburbs.  This does not include military or contractors, public relations and other government dependent private sector workers.

So, it is logical that in the federal government employee rich Washington, D.C. region average household incomes significantly exceed the rest of America.

What do you think? Is it right that our federal civil servants make so much more than the average worker? Leave your comment below:

Well, the redistricting and reapportionment processes are complete. The county has renamed every precinct in the county. Over a third of the precincts have had border changes.

Here is a map of how it all shook out. I am listing the new precinct boundaries, along with their numbers. I have provided both the new numbers in bold, and the old numbers in italic. The old numbers are only approximate, as boundaries have changed. 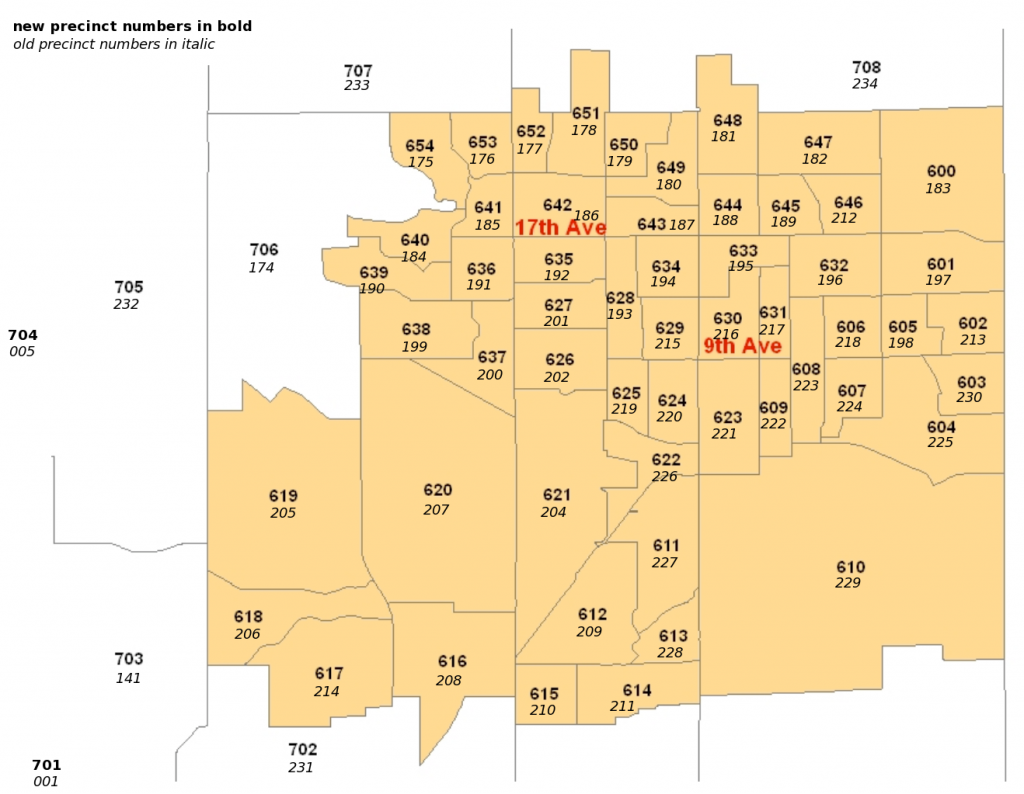 Click on the picture for a higher-resolution version of the map.

The county has assigned voters to each of these new precincts. However, I do not yet have access to a more detailed view of the streets forming the precinct boundaries. As soon as I have access to such a map, I will post it.

Some precincts have had radical changes. For instance, there is no new precinct corresponding to old precinct 203. It has been subsumed into 619 and 620.

in the meantime, the State GOP can tell you what precinct you are in. Just click http://caucus.cologop.org/ and fill out your info. They also give you the address of your caucus, as well as the option of pre-registering for it.

“The whole state must be so well organized that every Whig can be brought to the polls. So divide the country into small districts and appoint in each a committee.
Make a perfect list of the voters and ascertain with certainty for whom they will vote.
Keep a constant watch on the doubtful voters and have them talked to by those in whom they have the most confidence.
On Election Day, see that every Whig is brought to the polls.”

Substitute ‘Republican’ for ‘Whig’ in the above, and this is still a good description of the role of a PCP.

(Lincoln was a Whig before the Republican party existed. The Whig party tore itself apart over the slavery issue.)